This project outlines a continuous approach for treating discrete granular flows that hold across multiple scales: from experiments that focus on centimeter-sized control volumes to tests that involve landslides and tall buildings. The motion of the continuum used to capture the granular dynamics is resolved in spaced via the Smoothed Particle Hydrodynamics (SPH) method. The interaction between the granular material and immersed rigid bodies is posed and solved as a “fluid”–solid interaction (FSI) problem using boundary conditions enforcing (BCE) SPH particles rigidly attached to the boundary of the body interacting with the granular material. Several numerical experiments (angle of repose, ball drop, and cone penetration) were carried out to validate the accuracy of the proposed methodology. The approach is subsequently demonstrated in conjunction with a 3D landslide simulation, a plowing operation and a moon rover simulation. The approach discussed has been implemented and can be used in an open-source simulation platform publicly available on GitHub. The implementation leverages GPU computing. 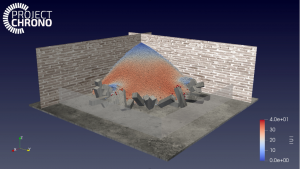 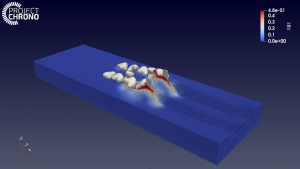 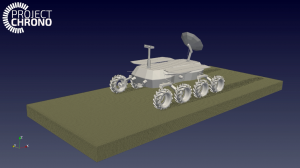