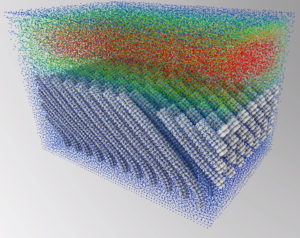 The interaction of fluid-flexible bodies was studied via a Lagrangian-Lagrangian framework, relying on Smoothed Particle Hydrodynamics, a general 3D rigid body dynamics, and an Absolute Nodal Coordinate Formulation (ANCF). The dynamics of the two phases, fluid and solid, are coupled with the help of Lagrangian markers, referred to as Boundary Condition Enforcing (BCE) markers which are used to impose no-slip and impenetrability conditions. Such BCE markers are associated both with the solid suspended particles and with any confining boundary walls and are distributed in a narrow layer on and below the surface of solid objects. The ensuing fluid-solid interaction forces are mapped into generalized forces on the rigid and flexible bodies and subsequently used to update the dynamics of the solid objects according to rigid body motion or ANCF method. The robustness and performance of the simulation algorithm is demonstrated through several numerical simulation studies.